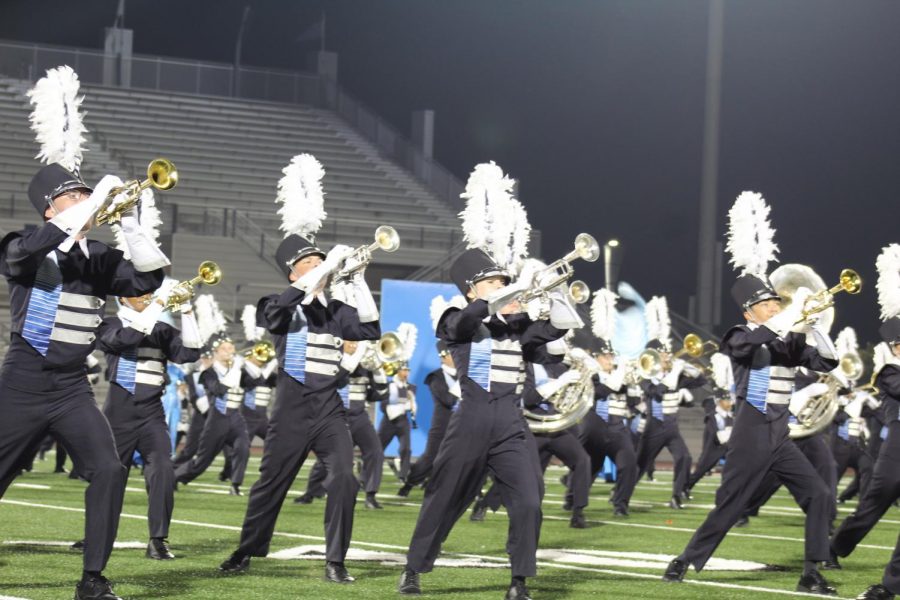 The fighting Falcon marching band marched their way into victory in the Friendswood Marching Competition on Sept. 25. Marching band placed fifth out of 14 schools in both prelims and finals with their show, Metamorphosis in Blue.

“Historically we’ve done very poorly at Friendswood to see us get fifth was really good,” Charlie Webb, senior trombonist, said. “It shows that our program has really grown, I’m excited to see what the future brings.”

Metamorphosis in Blue contains solos as well as full ensemble sets of music in the show.

When the competition took place, the show wasn’t fully completed. Since then, the band has learned the last part of their show and will be able to march it at future games and competitions.

“We only had about five minutes of the show while other schools had closer to seven,” Soisson said. “Now that we added a couple minutes and a closer to the show, I think it’ll be really good.”

Students were also given the opportunity to do other things when they were not performing.

According to Charlie Webb, band is something that takes up a considerable amount of free time, so he uses downtime at competitions to do homework.

While watching other bands perform, students could compare their own skills to that of other bands.

“There is a lot of good competition out there, especially Brook,” Webb said. “There are some school that are going to be pretty hard to beat.”

Students understand that as the season progresses, they have certain skills that they will need to master.

“The only thing I think I need to work on is part three because it’s new,” Efrain Ruiz III said. “However, I think [my section] could get more into the show itself.”

According to students in the marching band, this year’s show is more of a choreography intensive show.

“We’ve come along as a band,” Webb said. “From doing very basic choreography to hops and more jazz-like routines.”

Students are encouraged to go support the band at their next competition which takes place at Challenger Colombia Stadium on Oct. 16.