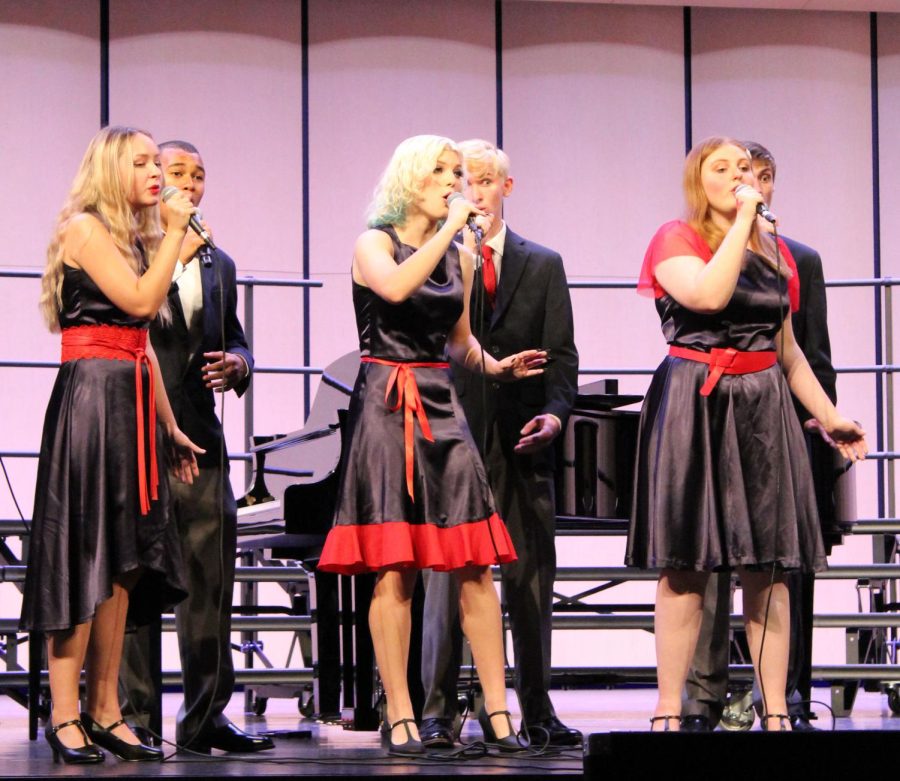 On Friday, April 8, the Jazz Band and Choir filled the PAC with sound and rhythm as they performed their annual joint concert, “Jazz at The Lake.”

This performance was one of the last for some of this year’s jazz and choir participants. The stage occupied many students, including a handful of seniors who were soon to be going their own ways in the jazz department.

“I was feeling super glad that I could create such amazing music with a great group of individuals,” Alex Beel said. “We all had fun and the crowd seemed to like it, definitely a success story.”

While the seniors were an important part of this concert, it couldn’t have been done without the rest of the team’s hard work.

“We practiced with the soundwaves beforehand as well as had a 4-hour rehearsal the day before the concert,” Meredith McKinnie said.

Quite a few of the jazz and choir participate claimed to be very nervous before and during the concert. Many of them stepped up and performed solos to reflect their talent.

“I was nervous, yet excited,” William Berry said. “I had a solo in the first half of a song and I think it went well but I felt relieved afterwards.”

After lots of repetitive practicing, some of the members developed favorite pieces of music along the way which they had a blast performing.

“My favorite song was ‘As Long As I’m Singing’ because it was fun, upbeat, fast, and difficult,” Beel said. “We played some recognizable tunes and some others as well.”

Despite all of the nerves, both the jazz and choir were extremely grateful to be given the chance to project their talent once again to the crowd.

“I think the concert was a success and it was also a fundraiser to gain money for our program,” Berry said. “A lot more people than I thought showed up so hopefully we got a good amount of profit.”

Eleventh grader Carmella Puccetti said she was excited for the performance, but agrees every student comes into a big stage event like this nervously.

“I have stage fright, so when it comes to singing in front of people, it can be difficult, but I always push through it using my best skills,” Puccetti said.

“I would like to perform the best me and my team can, but I know nerves can get in the way and stuff happens,” Lampson said. “If everyone on my team is putting their best effort, then I think we will be okay.”

Teamwork is important when performing with other individuals. Everyone must do their part to make it a successful show.

This was not the choir’s first or last performance. Coming up in May, the students have their next big show, “Pop Show.” Hopefully Jazz at the Lake prepared the Falcons to push even harder than the last time.